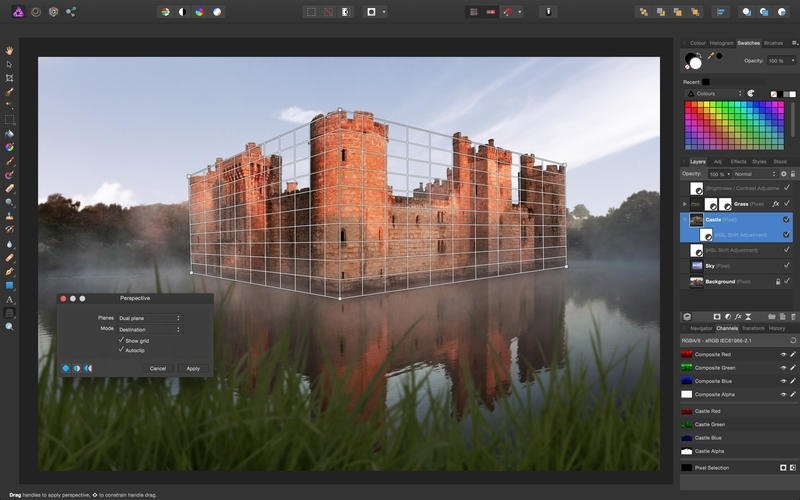 Affinity Photo was released over a year ago on Mac OS X. Its success on the App Store definitely shows how great the software truly is.

Affinity is next-generation photo editing and graphic design for creative professionals on Mac.

Settings for streaming steam games on mac. It is also proof that people are looking at different options than the traditional Adobe workflow. Until now, one thing refrained many: Affinity Photo was available only on the Apple platform.

But today is a new day and the software is now Windows compatible. Affinity Photo is made available in beta version for Windows and includes all the features of the Mac build up to the 1.5 release. It makes it all the more interesting because a few very useful features were left out until now and made the transition from Photoshop quite difficult for professionals needing a fast workflow. The 1.5 version includes Macros (an equivalent to Photoshop’s actions), Focus Stacking, advanced HDR merging in 32 bits, batch processing, as well as a new way to edit 360-degree images. So the app is catching up on some features it was lacking and even adds new possibilities. Raw file development in Affinity Photo Personal Experience You probably wonder how good the Windows version is, how it stacks up against Photoshop and the Mac app, or just how stable it is.

Well, I have been lucky enough to have access to the beta for the past few days, and I must admit, it’s more than decent! It’s even better than many apps that are not described as beta or RC builds. The macro tool proves to be quite useful. It is something I was missing in previous Affinity Photo releases. I heavily rely on actions and scripts in Photoshop, and couldn’t live without them to keep my workflow as fast and efficient as possible.

Macros are a good start, but it isn’t as powerful as Photoshop’s scripts or even actions. The tool was made very simple and accessible. No condition possible, no breakpoint, or anything like that. Hopefully, this will come down the road, but at least, now, there is a way of speeding things up. In terms of stability and speed, the build I had was very decent like I said above.

The speed is very much comparable to the Mac release that I am used to. Meaning it is incredibly fast. For most things, I would say faster than Photoshop even though CC 2017 is getting better in that regard. As far as stability goes, this is still a beta version. I didn’t find many bugs and the software didn’t crash on me more than once (which might actually be my fault), so it is usable and not just for testing purposes. Keep in mind it is a beta for now, and that stability may be an issue in some circumstances, so don’t get mad if the app freezes or loses some data.

Can it Replace Photoshop? The interface is very intuitive and is close to enough to Photoshop that you don't have to learn a new software from the start. There are a few shortcuts that are not exactly similar, but it's not always a bad thing to change our customs.

The app even offers a few functionalities that will simplify the life of many – the built-in frequency separation and the real-time blending modes are two of them. I have used Affinity Photo since its launch on a regular basis for specific tasks because for some jobs it just performs better and faster. I haven't made the switch yet because the scripts I heavily rely on cannot be used in Affinity, and the new macro feature is not powerful enough for me. However, for most users, Affinity Photo will be more than sufficient, for a price lower than Photoshop. So can it replace it? If you don't need all the fancy advanced features of Photoshop that only a few really use, then surely yes it can.